Capitalism is: a system in which private capital is used in the production or distribution of goods. – Oxford Dictionary.

Capitalism has made Europe and the United States wealthy. It has also led to huge debts, exploitation, oppression, unemployment, poverty and ever-increasing waste. Is the main problem the materialism, greed, and selfishness capitalism creates? Or could capitalism work if most people under capitalism had good characters, that is, a sense of equality, fairness, and the desire to do the right thing? Could capitalism be stable—not have to depend on constant growth or inflation?

Long ago I told my parents, “People buy bigger and bigger houses so they need to make more and more money. They need their companies to produce more and more so they need more and more people to buy their products. Pretty soon there will be too much of everything, including too many people for the earth to support. How can we and our leaders endorse an economy based on infinite growing?”

What does infinity mean?

When I was 7-9 years old, every few months, I would hear a flute-like sound in my head. Then a voice of authority would order me to hear this tone rise to infinity. I would try to obey.

I would imagine the tone going higher and higher, and when it got as high as I could imagine it, I would try to imagine it going even higher. I would suffer because I couldn’t obey the authority. When I tried to hear the tone go even higher, I might be able to stretch it a bit more, and maybe a tiny bit more than that. I knew it was far away from infinity and had to admit defeat.

At that point I would feel so stressed and frustrated. I would shake my head and arms to make the whole thing go away.

I didn’t tell a soul. I didn’t want anyone to think I was crazy. Nobody else seemed to hear rising flute-like tones in their heads and authoritarian voices demanding things of them. Never mind that the authority was asking for the impossible.

A few years ago someone introduced me to the idea that I could have said No to the authority and the tone. I liked that thought.

60-something years later, I realize that trying to push a musical tone to infinity is something like an economy built on infinite growing. They’re both illogical. At some point, it’s bound to crash and people will be shaking their heads.

Just like my rising tone had an end, so do the resources of the earth. We need to slow down our population and take better care of our planet or it will become too crowded and too polluted. And the economy… what about it?

But how will we get from here to there? Someone who understands economics and governments better than I do might explain how to achieve an equal distribution of wealth and resources. And how to convince Americans it would be positive to have a saving attitude instead of consuming way beyond their need. The propaganda from banks and advertisers for decades has been to spend and borrow frivolously.

I’m taking time out from my Famous Personality Types series to write about something that’s been bothering me for a long time. It feels like The Emperor’s Clothes—something obvious that people don’t talk about. I’ve gotten it off my chest. Thanks for listening. 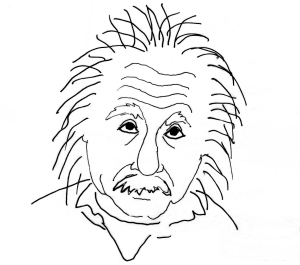 Albert Einstein was an Observer in the Enneagram system. “My passionate interest in social justice and social responsibility,” he wrote, “has always stood in curious contrast to a marked lack of desire for direct association with men and women. I am a horse for single harness, not cut out for tandem or teamwork. I have never belonged wholeheartedly to country or state, to my circle of friends, or even to my own family. These ties have always been accompanied by a vague aloofness, and the wish to withdraw into myself increases with the years.

Such isolation is sometimes bitter, but I do not regret being cut off from the understanding and sympathy of other men. I lose something by it, to be sure, but I am compensated for it in being rendered independent of the customs, opinions and prejudices of others, and am not tempted to rest my peace of mind upon such shiftless foundations.”

Born at Ulm, Wuerttemberg, Germany, in 1879 he died in 1955. His boyhood was spent in Munich and away at a school in Switzerland. He attended lectures while supporting himself by teaching mathematics and physics at the Polytechnic School at Zurich until 1900. After a year as tutor, he was appointed examiner at the Patent Office at Bern where he became a Swiss citizen and obtained his Ph.D. at the University of Zurich.

In 1909 he was appointed Extraordinary Professor of Theoretical Physics at the University of Zurich. In 1911 he accepted the Chair of Physics at Prague and returned to his own Polytechnic School at Zurich as full professor the next year. In 1913 he became director of the Kaiser Wilhelm Physical Institute in Berlin. He was elected a member of the Royal Prussian Academy of Sciences, which enabled him to devote all his time to research.

He became a member of the Institute de France and received honorary degrees from Oxford, Cambridge, Paris, Madrid, Buenos Aires, Zurich, Yeshiva, Harvard, London and Brussels. In 1935 he was awarded the American Franklin Institute Medal.

In 1932 Dr. Einstein became Professor of Mathematics and Theoretical Physics and served as the Head of the Mathematics Department at the Institute for Advanced Study Princeton, N.J. In 1940 he became a U.S. citizen.

In 1905 he published four important papers: one explained a method for determining molecular dimensions; one explained the photo-electric effect, the basis of electronics, for which he won the Nobel Prize in 1921; one presented a molecular kinetic theory of heat; and one was the first of his Special Relativity Theory, “Electrodynamics of Moving Bodies.”

Outward appearance meant nothing to him. He was described as a stranger, a close neighbor, yet at the same time a visitor from another world. As he grew older his otherworldiness became more pronounced, yet he was still warm. Princetonians got used to the long-haired figure in pullover sweater and unpressed slacks wandering in their midst, a knitted stocking cap covering his head in winter.

Ingrid Stabb and I  feature Einstein as one of our Famous People Observer examples in The Career Within You on page 132.

This blog is largely based on his NY Times obituary.

For more Famous People see my Psychology Today blogs and my web site.